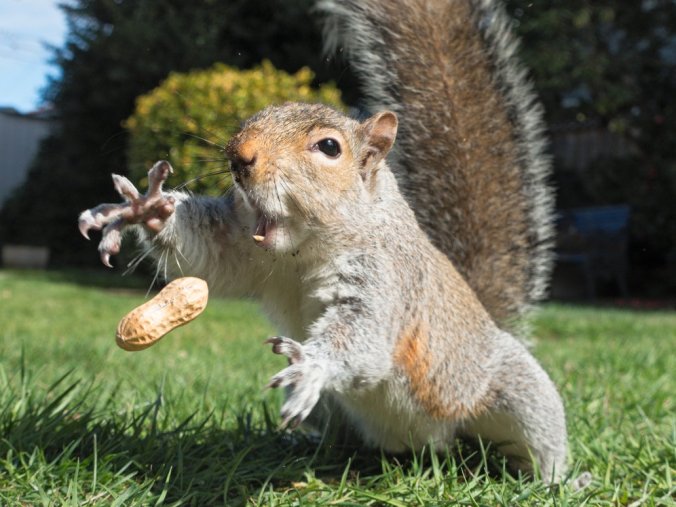 No squirrels were harmed in this post. Image by easterngraysquirrel.deviantart.com

Eric* and I knew we could teach a squirrel to do tricks.

First, get it to eat food we’d thrown.

Then, get it to eat from our hands.

Next, train it to come when called.

Ultimately, get it to wear a costume and ride a squirrel-sized bicycle.

We talked about this at length, interrupting each other eagerly as new thoughts occurred to us. I was so thrilled at the prospect that my spine seemed to jingle with sparks.

Eric and I didn’t normally play together. We didn’t normally speak to each other. Boys and girls almost never hung out together in my neighborhood, and besides, he was going into fourth grade that fall while I’d only be a third-grader.

But Eric and I were united by a vision. Sitting in his front lawn, grass bristling against our legs, we bragged about how much animals liked us. Eric said he could whistle and a bird would land on his arm. He didn’t offer to demonstrate that skill right then. I implied I was some kind of mystic who could hear animals talk to each other. I was pretty sure I could hear that squirrel, sitting on its haunches in a nearby tree, practically begging us to be its friend.

All our efforts to lure it closer failed, so we reluctantly decided to build a squirrel trap. Not that we were the trapping sort of kids, but we’d make it up to the squirrel once we’d captured him.

Enthralled, we didn’t pay any attention to the likelihood of our vision becoming a reality. The moment was everything. We were in the powerful state of flow. You know what this feels like — invigorating, enlivening, wholly absorbing.

Process actually has more to do with our happiness than outcome, according to some psychologists. Maybe this is what happens when highly successful people don’t appear all that blissful once they’ve gotten to the top of their fields. Celebrities, sports figures, and others sometimes reach what seems to be the pinnacle of wealth and status only to self-destruct. Eric and I weren’t likely to reach the pinnacle of squirrel training, but we didn’t care.

We rustled up some scrap wood, a hammer, and nails. Squatting on a driveway too hot to sit on, we tried to transform small and oddly shaped plywood pieces into the trap of our dreams. When that failed we simply tried to build some kind of 3-D shape. We failed, failed again, failed a few more times, then resorted to something else. A cardboard box.

This material was easier to handle but not easy enough. The dull mat knife we were allowed to use barely sawed through the cardboard. Our attempts at making a door we could shut from a distance gave us several quite painful rubber band-related injuries. We slowed down as we realized our grand plans might not be workable. Not because it wasn’t a great idea, we agreed, but due to our construction skill deficits.

Both of us still loved the vision of that squirrel becoming our friend. Even if he didn’t wear a costume and learn to ride a squirrel-sized bicycle, we were happy there in the driveway where we’d realized magic was just a little too hard for us to build right then. There was awkward silence.

Thankfully, two bigger boys rode by on their bikes and mocked Eric for playing with a girl. Relieved, we took this as an excuse to go our separate ways, completely satisfied with our attempts. That squirrel never knew how close it was to fame.

9 thoughts on “Teaching a Squirrel to do Tricks, Almost”