For centuries it was common wisdom that a few hours of fresh air each day was an absolute necessity. Children from infancy on up were bundled in warm clothes and taken out in all seasons. The practice stemmed from a longstanding belief that time outdoors promoted strength and robust health. It was also believed that it kept various character weaknesses at bay. That is, until the practice was poo-poo’ed as nonsense. Nothing but old wives’ tales.

Fortunately, my parents thought otherwise. My mother knew childish energy is best expended outdoors. It never occurred to her that we required her participation as she sent us out every day. When we were small she told us to stay in the yard, checking every now and then from the window. Soon our range expanded to a few acres of woods behind our house plus pretty much anywhere we could go on our bikes while still making it back in time for dinner.

I learned even more about the importance of being outside from my father. He set a quiet example by paying attention to birds, the weather, the garden. If we went somewhere with him other than a hardware store, it was to go hiking in the Cleveland Metroparks.

It wasn’t until I had my first baby that my father showed me a deeper power of nature, again simply by example. When he held babies he almost always walked outdoors with them, particularly if they were fussy.

“Here’s the sky,” he’d point. “That’s a tree over there, you’ll be running on this grass in no time,” he’d gently tell an infant.

Their eyes would get big and they’d look around, more calm and focused than they were indoors.

I started to follow his example. If I couldn’t figure out my baby’s troubles, I’d go out to lie on the grass during the day, or wrap up warmly to look at the stars in the middle of the night. It nearly always settled a crying baby.

It worked even better for toddlers. They’d get cranky in the house, far crankier in the car. They wanted out in the largest sense possible. They’d stay outdoors as long as I’d let them, on our most glorious days this lasted for hours. When she was a year old my daughter liked to pick up little stones, hold them briefly, then place them in little piles — an early form of scientific experimentation. She’d look at me, shaking her head to remind herself they couldn’t go in her mouth. My little children helped me garden and sweep and rake. They dug in the dirt, made fairy houses out of sticks and leaves, filled their little wagons with the hickory nuts that littered our yard in autumn, stomped in puddles, squatted to watch bugs, climbed on logs, and asked endless questions. All these richly sensory experiences happened simply because we were outdoors. I had no idea at the time that all of this movement helped build essential brainpower.

As Gill Connell and Cheryl McCarthy explain in the wonderful book, A Moving Child Is a Learning Child

A young child can learn only what her brain is primed and ready for. And in the early years, that’s everything the body has to teach—the tangible, physical, and sensory qualities of the world around her. It’s no wonder preschool learning rarely happens sitting down.

…every hour spent in the open is a clear gain, tending to the increase of brain power and bodily vigour, and to the lengthening of life itself. They who know what it is to have fevered skin and throbbing brain deliciously soothed by the cool touch of the air are inclined to make a new rule of life, Never be within doors when you can rightly be without.

Besides, the gain of an hour or two in the open air, there is this to be considered: meals taken al fresco are usually joyous, and there is nothing like gladness for converting meat and drink into healthy blood and tissue. All the time, too, the children are storing up memories of a happy childhood.

In some Nordic countries, parents believe it’s healthier for babies and children to be outside for a few hours a day in all but the most extreme temperatures (and they mean extreme, as in 0 degrees Fahrenheit). It’s a common practice to dress babies warmly and tuck them in a stroller in the yard, balcony, or outside a shop to nap on a snowy day.

Pediatrician Harvey Karp points out, in The Happiest Toddler on the Block, how staying indoors is overstimulating while at the same time boring for children.

Our homes are boring because they replace the exciting sensations of nature (the feeling of the wind on their skin, the brilliant sun, the soft grass, etc.) with an immense stillness (flat walls, flat floors, no wind).

Yet at the same time, he writes, being indoors is overstimulating.

It bombards them with jolting experiences that kids in the past never had to deal with: crazy cartoons, slick videos, clanging computer games, noisy toys, and bright colors everywhere…which can make many little children feel stressed.

There are exhaustive studies showing that time outdoors, particularly in nature, benefit us in myriad ways including better sleep, improved coping mechanisms, greater confidence, more mature social skills, and much more. I think there’s something intangible too, something to do with keeping alive the awe and wonder that is our birthright. That’s something the youngest children can help us relearn. 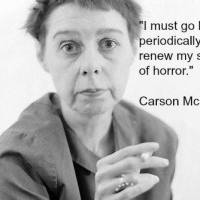