We used to throw strangely amusing parties on a more regular basis. Box parties where kids made forts and mazes and castles out of huge boxes. Tie dye and batik parties that were a messy extravaganza of color. Science-y gatherings where everyone worked on the same ridiculous experiment with vastly different results. Even an election commiseration event where everyone had to bring a few jokes about a certain president whose name rhymed with “tush.”

The longest lasting tradition? Our summer pig pen parties. These were grand messy BYOB affairs, as in bring your own bucket—of dirt. It was dumped in a backyard kiddie pool and mixed by all children in attendance into perfectly creamy mud, which they used to coat themselves until they were recognizable only by bathing suit outlines. We put a garden hose at the top of our slide and the kids careened down in glorious streaks of mud. We handed out cans of shaving cream for use as body décor (with firm instructions to avoid faces because it’s not fun in the eyes). We brought out ample water balloon supplies. And we insisted the kids eat without utensils or hands, just direct face to plate. Like pigs. Of course these parties got out of hand once the grown-ups refused to sit in lawn chairs watching their kids have all the fun. Some neighbors showed up in pig masks, others showed up with water balloons sneakily hidden in baby strollers and red wagons, others brought massive auxiliary supplies of shaving cream. Normally well-behaved men used hoses to fill garbage cans with water, which they dumped over the heads of the few civilized mommies who thought they’d keep their hair looking nice. One year the entire assemblage of pig pen partiers were incensed that a regular pig pen attendee decided to stay home to repair a fence. All of us walked down to the street in wet, muddy, shaving cream streaked glory to drag him to the party. His police chief father who was there helping him make the repairs looked seriously alarmed. We dragged him anyway.

I’ve been fantasizing about a backyard Jackson Pollack party where everyone brings leftover paint to fling at canvases, maybe even using the giant trebuchet our kids built for some super-charged paint tossing. I can just see us all in splattered clothes, posing for a group picture with candy cigarettes hanging out of our mouths. What’s stopping me? I live with practical people who wonder if paint will get tracked in the house because partygoers are human and will eventually need to use the bathroom.

My recent event was a quietly civilized affair: a collage party for some artful cutting and pasting. I have all sorts of glue-able stuff here. Old sheet music, sewing patterns, stockbooks, wallpaper, tiny do-dads, lace, game pieces. All I asked people to bring were their own scissors, marked with their names (because scissors are migratory beasts) and a potluck offering. They brought a lot more glue-able stuff to share. I thought we’d stick down some background, let it dry while we ate and drank, then finish and move on to a second or third one each. But my friends ate and drank and talked while collaging. They didn’t want to stop cutting and arranging. It’s as if we all have too little time for something as simply satisfying as placing a scrap of paper on a page exactly as it pleases us. The event was less lively than the average pig pen party, that’s for sure. But it was restorative. No phones. No screens. Nothing else to do but indulge in the kind of play we call creating. I guess that doesn’t happen unless we make time for it.

Here’s a sample of collage party creations. (Some are backgrounds awaiting finishing touches.)

And let me know your ideas for strangely amusing events. I plan to steal them. 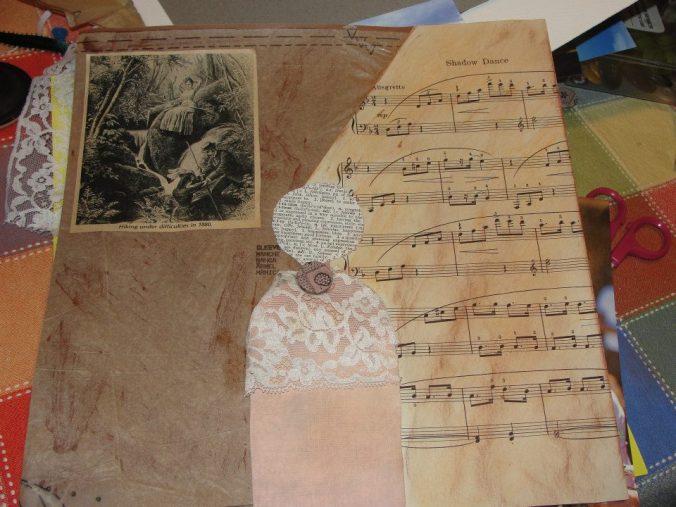 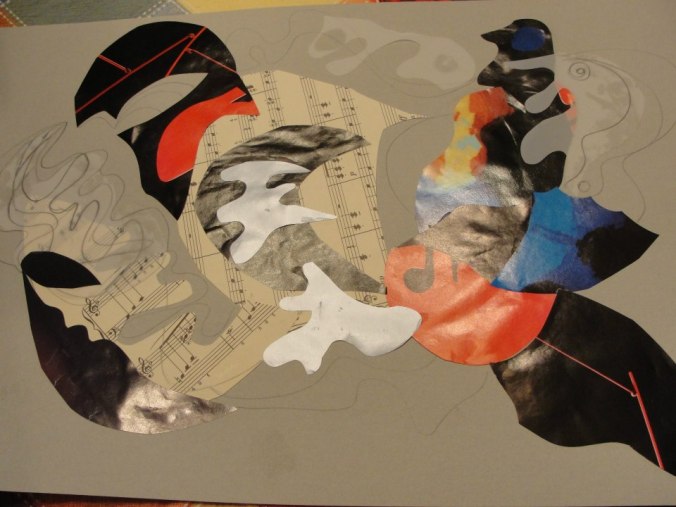