Quick, draw something important to you. Try to do it in five minutes or less.

Is it an object, a person, an idea, a goal, a value, or something else entirely? 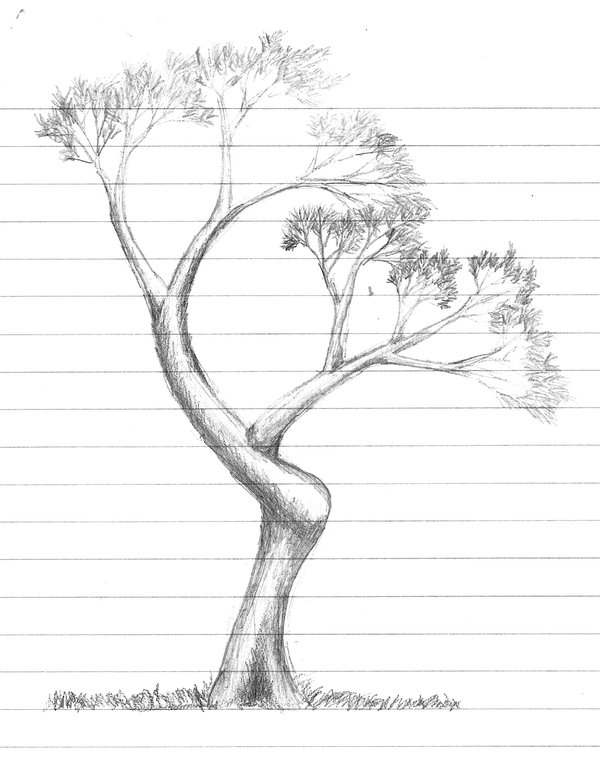 Those of us who don’t draw often (or ever) may be uncomfortable taking pencil in hand to create an image. But if we draw something without criticizing, erasing, and apologizing for the result we find that the process itself pulls us out of our habitual patterns of thinking. Like a form of meditation, sketching can take us to a still point in ourselves.

We may rely heavy on the written word throughout the day but our species used images long, long before formalized symbols such as words. Images are much more primary. When we generate those images we’re going deeper, beyond the chatter and clamor of daily life.

Back in college I was assigned a psychology class project. It was supposed to demonstrate Maslow’s hierarchy of needs. Maslow insisted that most people are focused on basic needs, fewer are able to move up to higher level needs, and the rarest make it to what he called self-actualization. 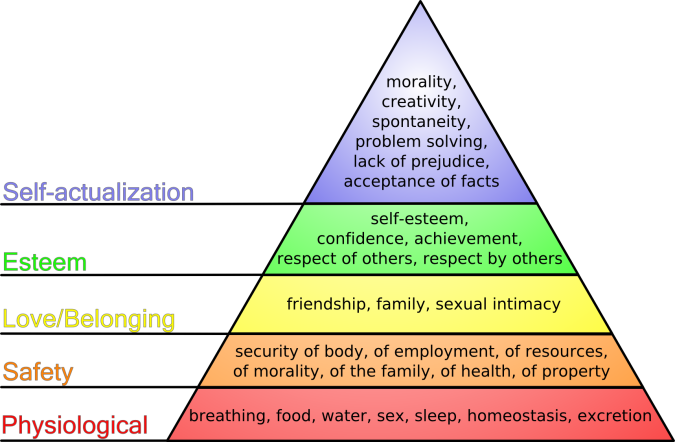 I designed my project to be simple and get me a good grade. I also hoped that it would disprove Maslow just a bit. I had nothing against the guy, I’m just not fond of stuffing people in categories. And besides, I already I knew people whose most basic needs were barely met, but were damn close to the top of the scale. They not only cared deeply but consistently reached out to help others. Or they worked tirelessly for a greater good without ever seeking acclaim. Or they lived creatively and according to their own unique vision, inspiring others by example.

My project was easy. I asked people to make a quick sketch of something important to them. I asked college students, people on the bus, neighbors, strangers in coffee shops, college professors. Invariably they insisted they couldn’t draw. (Neither can I.) At least a third of the people I asked turned me down. Drawing is apparently pretty threatening. Or short blonde college students are, not sure which. But those who did participate created pretty interesting results. I got the expected number of humorous liquor and sex-related drawings from guys, shopping and chocolate drawings from girls. (These were hardly character-defining, after all, it was a spur-of-the-moment request.)

Many more drawings focused on subjects like family, educational goals (probably related to the preponderance of college students in my project), and activities of all kinds.

A surprising number of people drew something less tangible. Love, compassion, happiness, making a difference, God, higher consciousness. These were represented by abstract drawings or symbols.

The majority of people weren’t content to let the images speak for themselves. They also used words. They added labels, explanations, entire sentences—seeking to make their meaning clear.

Back then, I presented my project as evidence that Maslow’s hierarchy wasn’t proof positive that we’re all pedaling along on different tracks. I postulated that we operate across many levels depending on all sorts of variables. That assertion annoyed my professor, who was not amused by a student who dared question an icon in the field and who did so in a paper filled with drawings. He wrote nasty remarks all over my paper (right over the drawings I collected) even though I closed with a lovely quote by Maslow.

“The concept of creativeness and the concept of the healthy, self-actualizing, fully human person seem to be coming closer and closer together, and may perhaps turn out to be the same thing.” Abraham Maslow

The range of images drawn for my college paper were very similar to those collected in a project by Catherine Young for the Schoolof Visual Arts MFA Interaction Design Program. Catherine explored how people around the world represent what makes them happy.  The response to Draw Happy  was so great that the project remains ongoing, with hundreds of participant’s drawings. 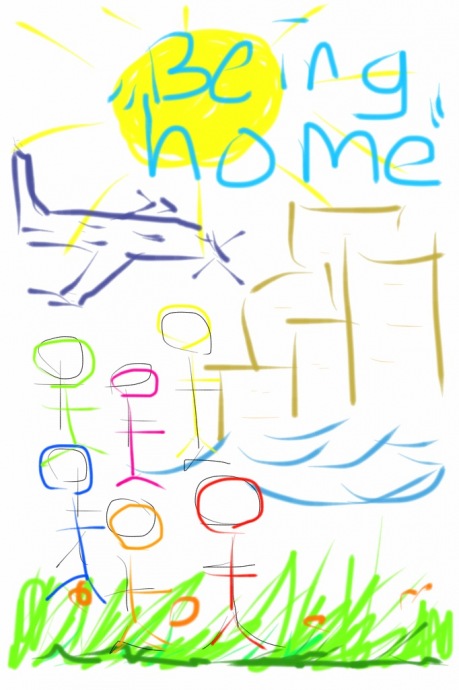 I have no beef with Maslow. But I’m still interested in what drawing does for us as whole beings. Those of us who aren’t artists might consider drawing as an unexplored avenue. Down this particular road are new ways to express ourselves, expand our creativity, and take a break from our relentless multitasking.

I harbor fantasies of indulging in illustrated journals and like to pore over an enticing selection of books on the topic but the fact is, I don’t even write in a journal. And my vows of sitting down to sketch at least once a week have never taken hold.

But there are much easier ways to spur ourselves to draw.

How can you add some non-threatening sketch time to your life?

Draw rebus pictures     Chances are you don’t write to-do lists out by hand. And most people text rather than write notes (let alone postcards). Try this. Occasionally write these things longhand using rebus pictures. You’ll inject some personality in a fun, cartoonish way. Rebus, if you don’t remember from preschool, are simple pictures used to replace words. Even a quickly rendered image is pretty easy to recognize.

Draw studies     Keep a supply of blank note cards or a tiny sketchbook for this project. You might choose to draw only saltshakers, or lamps, or shoes. DaVinci did all sorts of studies of this sort. He drew page after page of noses, bird’s wings, running water. This is a daydreamy exercise that invites you to find all sorts of nuances in your subject. You may not only become proficient in drawing saltshakers, but may notice saltshakers wherever you go.

Draw the same thing repeatedly     Draw something you regularly encounter. Draw the tree in your back yard as it appears in different seasons and times of day. Draw that souvenir bottle on your windowsill–in light and shadow, surrounded by clutter, filled with flowers. Draw the same scene over and over from different angles, as it might have appeared a hundred years ago, as it might look to a creature that sees only in temperature, or from a worm’s eye view. 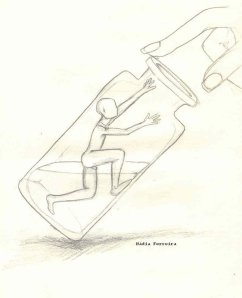 Draw your feelings     We don’t have a lot of creative outlets to express reactions to bad news, personal disappointments, big changes, grief, haunting regrets. Our feelings don’t go away while surfing the net. Whip out some colored pencils to illustrate your fervent opinion in satisfyingly jagged lines. Render your angst in exactly the right shade of gray, magenta, and orange. Or pull together your fractured ideals in a twisting vine that reaches across a wall you’ve drawn brick by brick. Chances are your mood will lift. Drawing might just empower you to take bolder action. 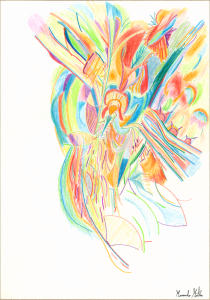 Draw on memories     The past continually inhabits the present. Try bringing it forth non-verbally by sketching it. Draw a favorite toy from childhood, the necklace your mother used to wear every day, your view of the chalkboard back in fifth grade, the door of your first apartment. You’ll be surprised what these drawings evoke.

Draw abstractly     Take away the burden of recreating representational images. Draw a favorite smell, a new idea, a mood, a strong impression left when waking from a dream already forgotten, a taste, a laugh.

Doodle  Doodling is great practice for those of us who don’t want to call what we’re doing “drawing.”  And this non-directed activity is a great way to allow your brain to idle while creative impulses emerge.

“A drawing is simply a line going for a walk.”  Paul Klee

Keeping a Nature Journal: Discover a Whole New Way of Seeing the World Around You

The Creative License: Giving Yourself Permission to Be The Artist You Truly Are

10 thoughts on “Don’t Say It, Draw It: Non-Threatening Sketching Inspirations”